Tutorial on conducting association tests with principal components (PCs). When latent variables are estimated by principal component analysis (PCA), the jackstraw can evaluate whether a variable is significantly associated with latent variables. In practice, this may help you to find variables that are substantially driving certain PCs. For technical details, refer to NC Chung and JD Storey (2020)1.

Latent variables (LVs) are unobserved and must be estimated directly from the data, using PCA and others. However, treating PCs as independent variables in a regression framework or a correlation test is circular analysis, producing anti-conservative biases and spurious associations. The jackstraw accounts for the fact that PCs are calculated from the data and to protect association tests from an anti-conservative bias.

The jackstraw R package is used for the association test. A few other packages are necessary to run this tutorial.

Latent variable models (LVM) are frequently used in data analysis explicitely or implicitely. Latent variables (LVs) can be seen as underlying sources of variation, that are hidden and/or undefined. In some cases, sources of variation may be directly measured, such as disease status or sex, and conventional association tests can be utilized to assess statistical significance of association between variables and such (independent and external) measurements. However, underlying sources of variation may be impossible to measure or poorly defined, such as cancer subtypes or population structure. For example, cancer subtypes based on histological tumor classification are highly imprecise. Therefore, it is a popular approach in genomics to estimate cancer subtypes using gene expression or other molecular data.

When we have a high-dimensional data where a large number of variables (e.g., genes) are measured for each sample, LVs are often estimated by PCA. After applying PCA to the observed data, one may like to identify variables associated with a set of PCs. To do this association testing while adjusting for over-fitting problem, we use the jackstraw test.

We simulate a simple gene expression data with \(m=1000\) genes (or variables) and \(n=20\) samples (or observations). The following simulation code generates a dichonomous mean shift between the first set of 10 samples and the second set of 10 samples. This may represent a case-control study, where an external/environmental factor influneces samples differentially. This mean shift affects \(10\%\) of \(m=1000\) genes (as indicated by a color bar on rows): 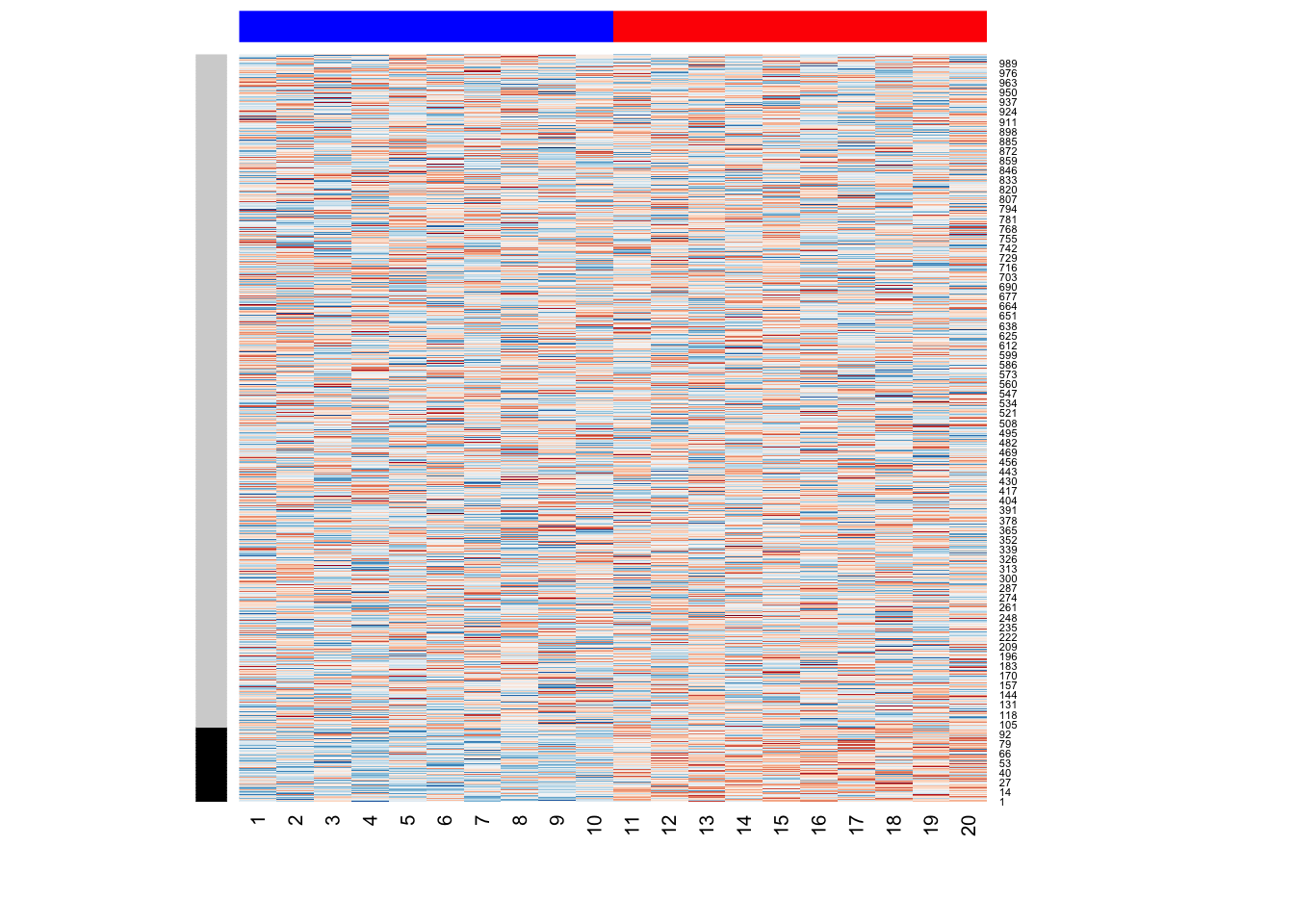 Please note that we know that there’s only \(r=1\) PC, because the data is simulated. In practice, one needs visual and statistical approaches to estimate \(r\). For a starter, we can visualize the variance explained with a scree plot. A simple permutation approach based on parallel analysis from Buja and Eyuboglu (1992)2 is implemented as jackstraw::permutationPA function. Some of great statistical literature on determining the number of PCs/LVs include Anderson (1963), Tracy and Widom (1996), Johnstone (2001), and more3. For R implementations and heuristics, check out nFactors and PCDimension 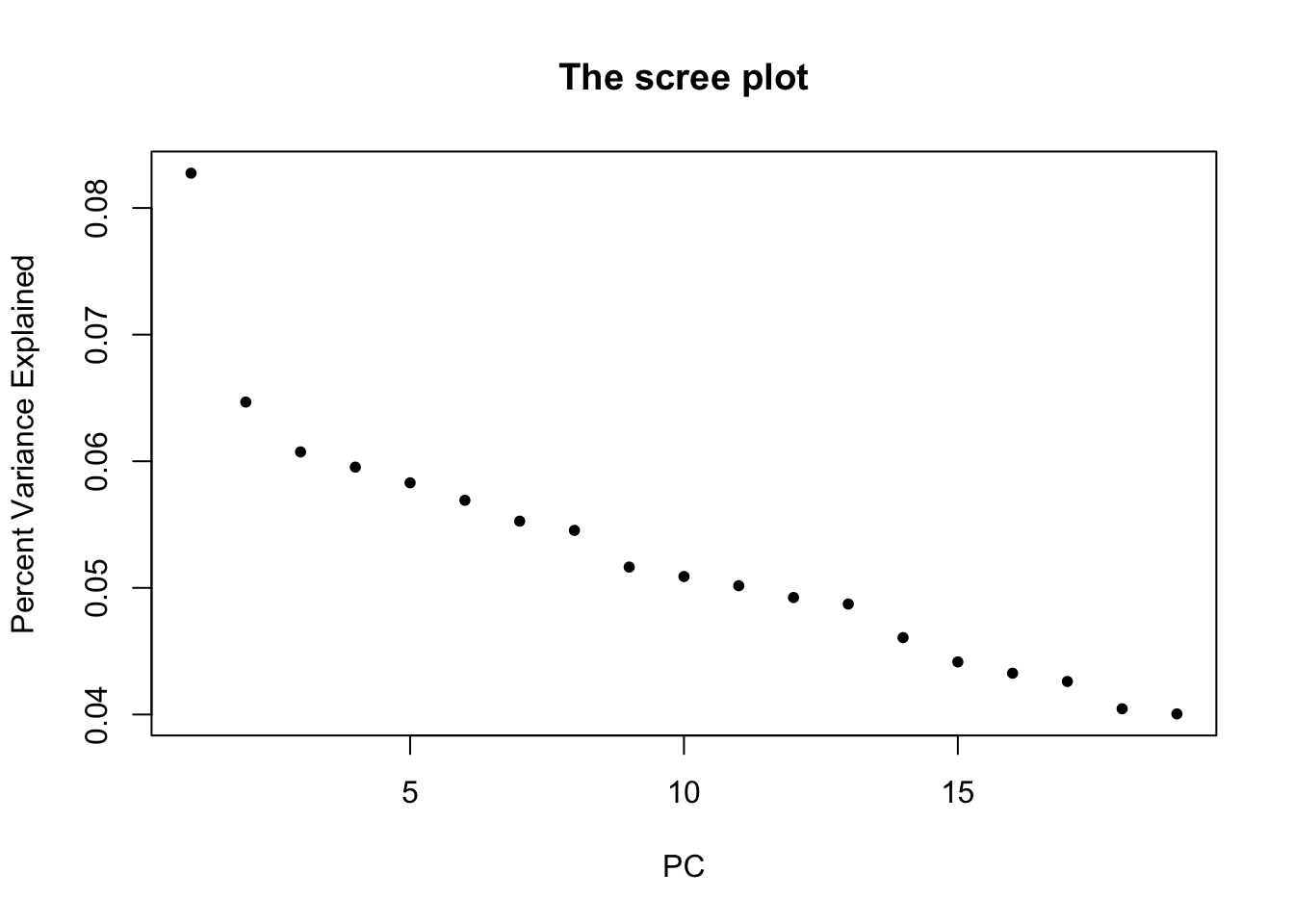 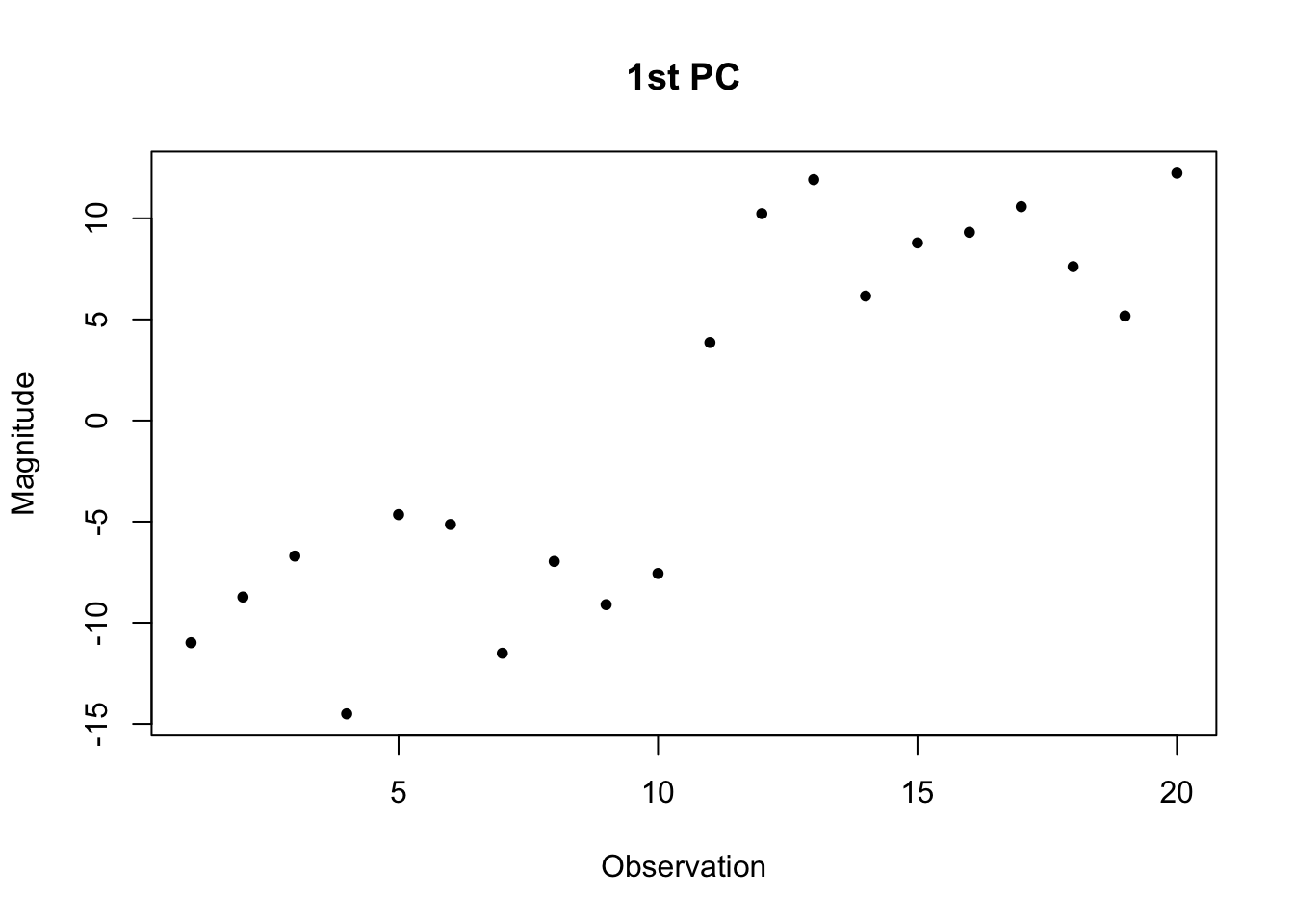 We are now ready to apply the jackstraw to our data, in order to assess statistical significance of association between variables and the first PC: 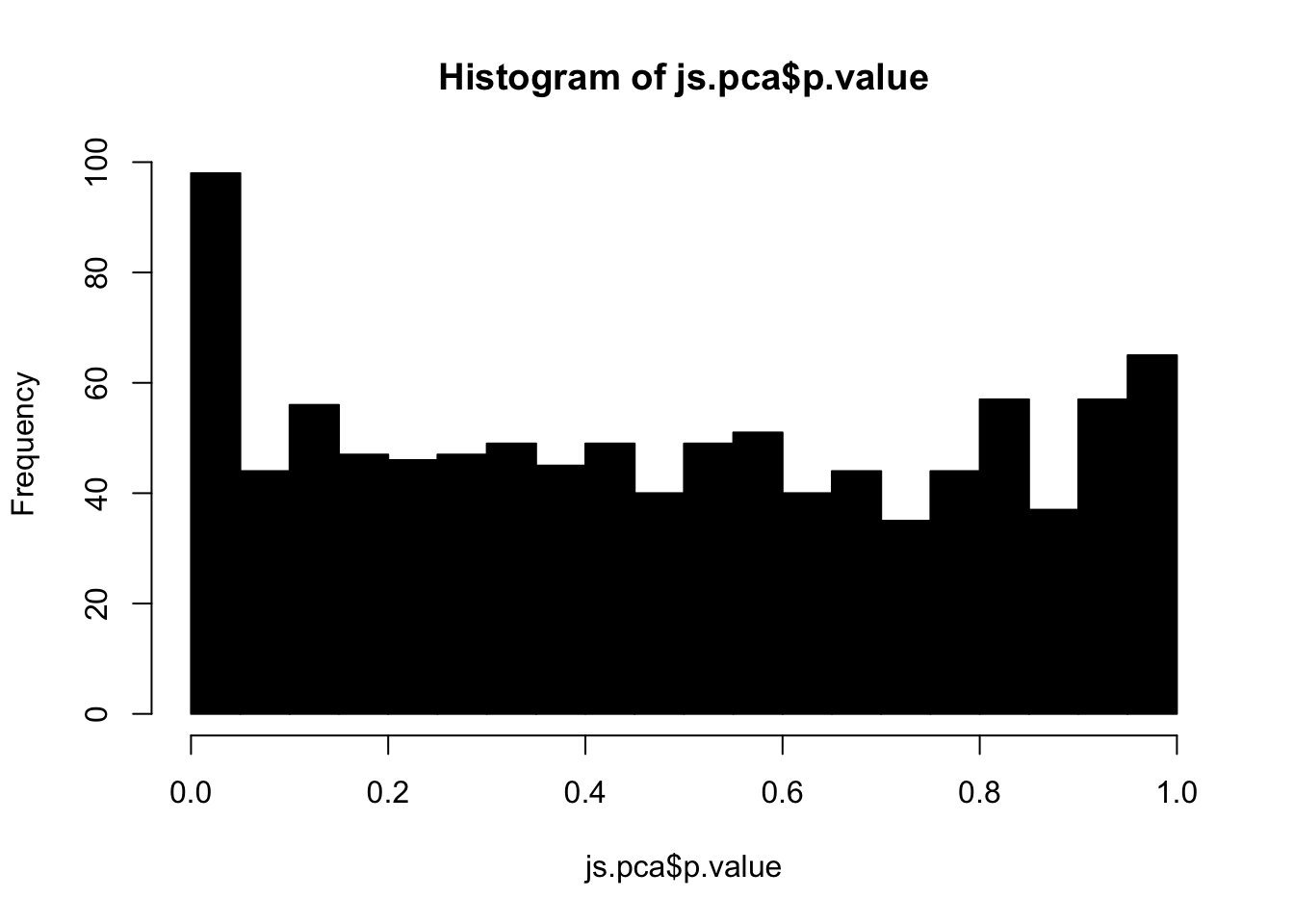 Since the data was simulated, we can visualize the p-values for null hypotheses (variables that do not exhibit true difference between two groups). We call these null p-values. Alternatively, alternative p-values are for alternative hypothesis (variables that do exhibit true difference between two groups). By definition, the set of null p-values should follow i.i.d. uniform distribution between 0 and 1: 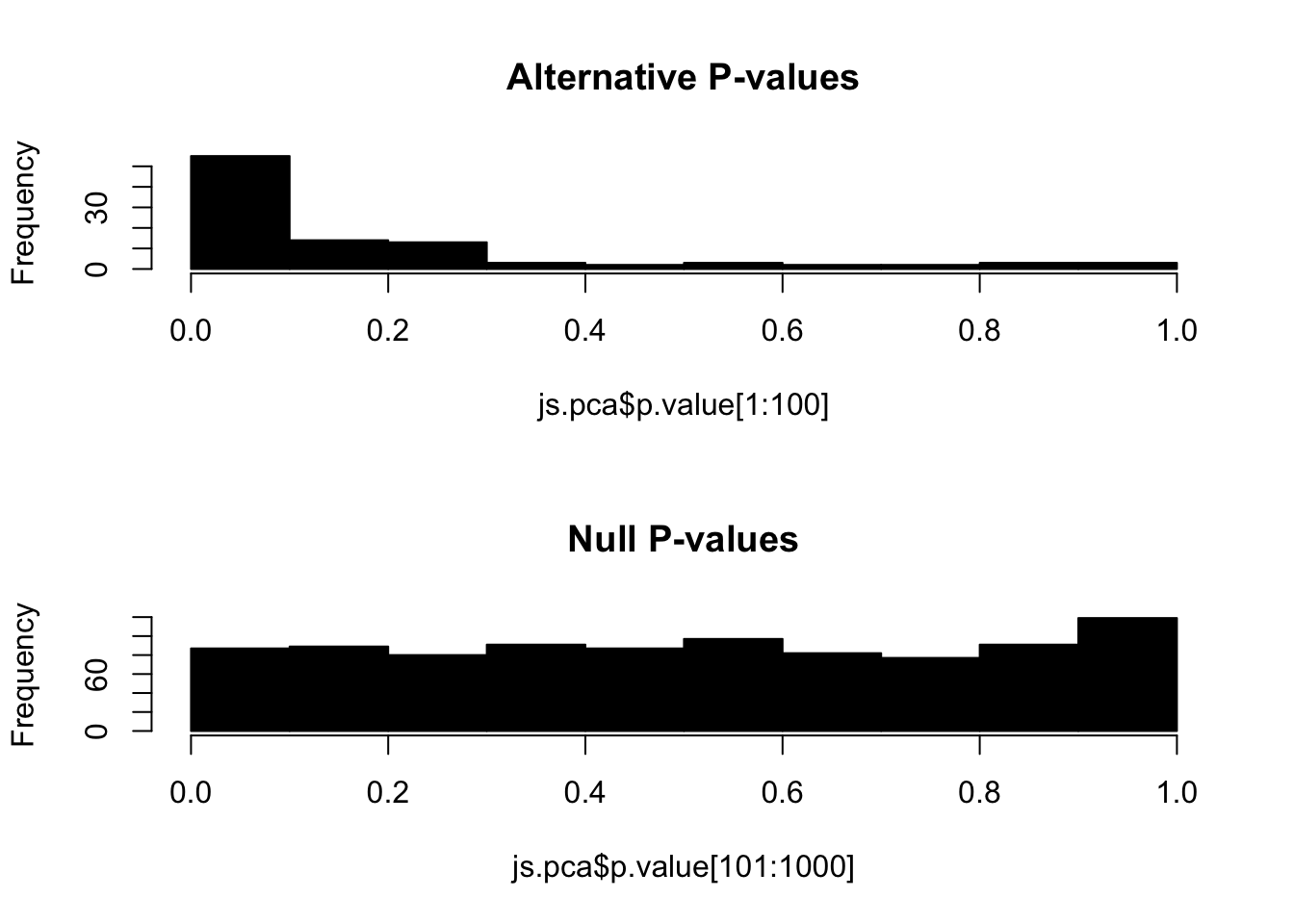 We aim to estimate an empirical distribution of F-statistics statistics under the null hypothesis that a variable is not associated with a PC(s).

Diagram of the jackstraw data. In this example of S=1, one row is randomly chosen and independently permuted. Systematic variation in \(\mathbf{Y}\) and \(\mathbf{Y}^*\) are almost identical when S >> M, such that PCs are also preserved. Then, synthetic nulls can be used to calculate the empirical distribution of null F-statistics.